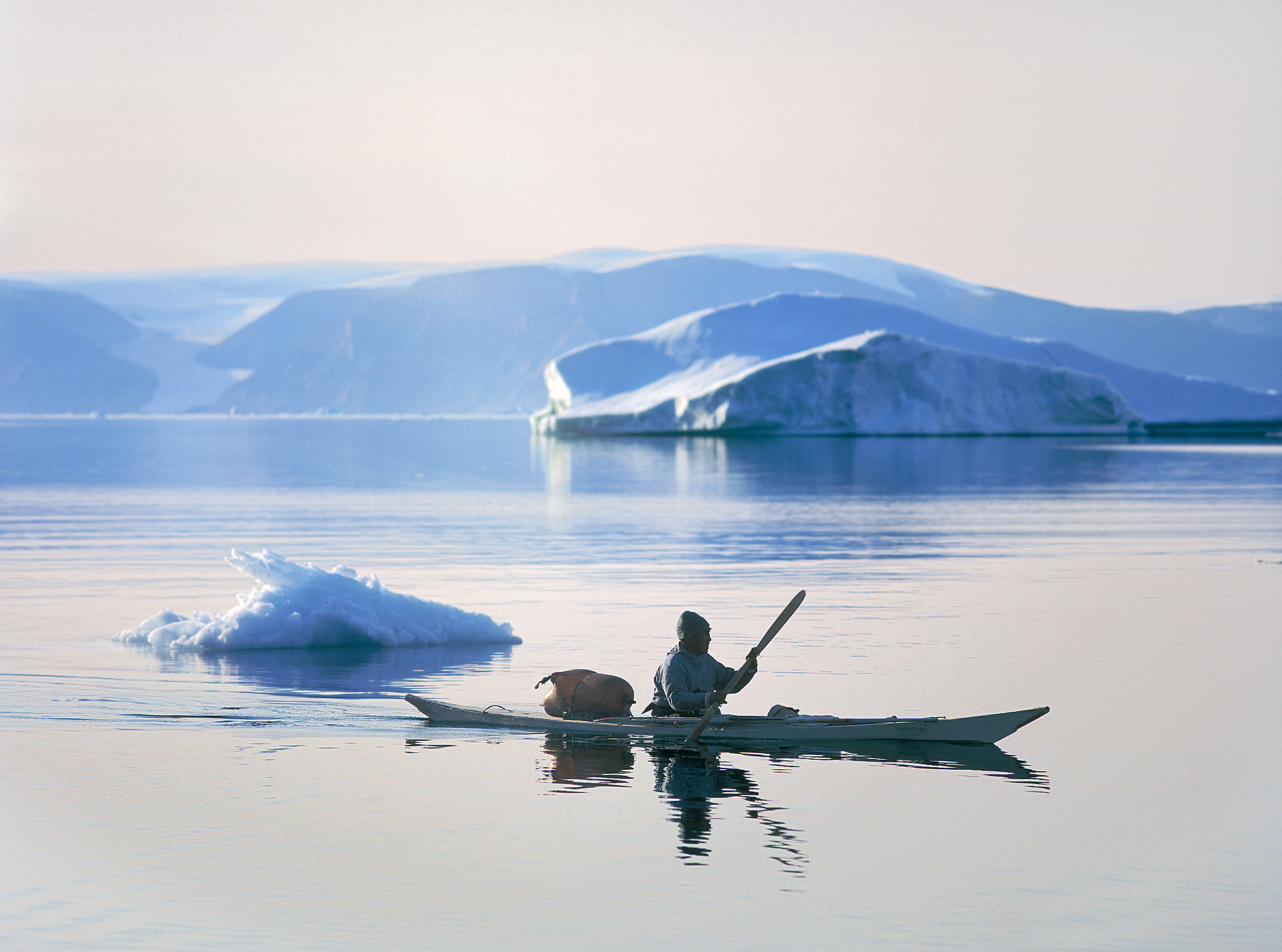 …the harpoon run through the air, and plunges the razor sharp point into the back of the narwhal. “Mattaq” shouts the Polar Eskimo Mamarut Kristiansen enthusiastic…

– We are in Thule District, an outskirt of the north western corner of Greenland, -close to Canada`s Ellesmere Island. Here live the Polar Eskimos, they are only about 600 individuals, were all live isolated here right below the North Pole. They have their own unique language, culture and way of living. These people are the last eskimos still living as their ancestors did centuries ago, where hunting are the basis of their existence. No other place in the arctic is it possible to find “Kayak-men” hunting seal, whale and walrus with hand-thrown harpoons from an original Eskimo kayak.

This was the reason why we wanted to make this group of people a visit and document their lifestyle. Danish authorities are very concerned that their way of living shall be as original as long as possible. A special permit, including a personal invitation from the Polar Eskimos here is required for visiting them. In addition to this it is necessary with a permit from the US as the last airstrip on our way northwards is the US Air Force Base at Pituffik (also called “Thule Air Base”). 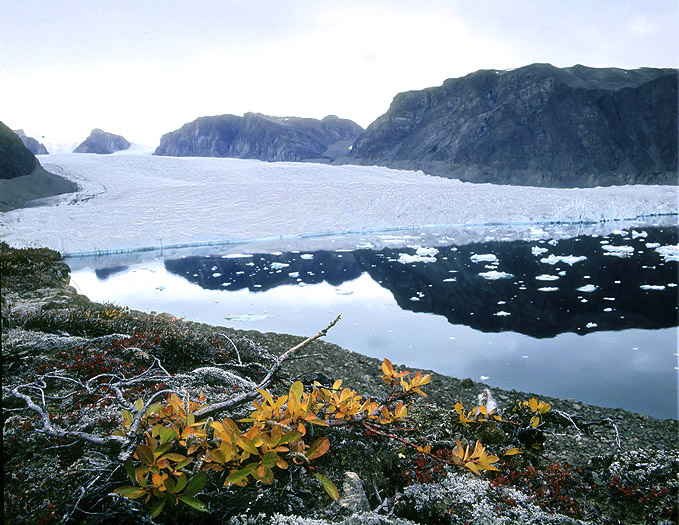 The Hart Gletscher in Inglefield Bredning is one of the many outlets of the inland ice cap. 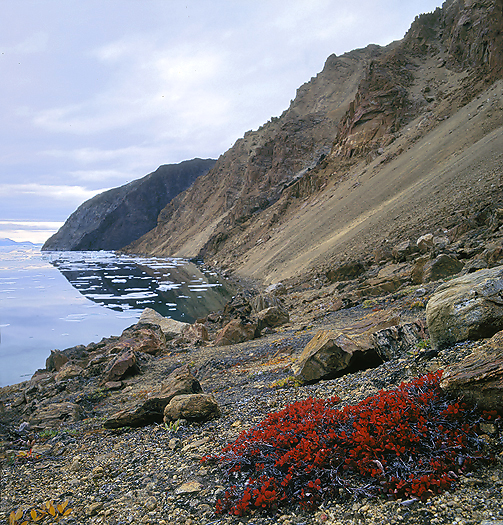 Alpine Bearberry at Josephine Peary Ø. The island innermost in the Inglefield Bredning has got it name after Robert Peary`s wife.

The time of the visit is in the beginning of  Fall. This because the “happening of the year”, the Narwhal hunt, is taking place at that time. These characteristic animals migrates at that time in flocks into the fiords searching for smaller fish. During a period of one month, almost every hunter are out establishing the winter supply for man and a great number of sledge dogs with narwhal meat & fat. 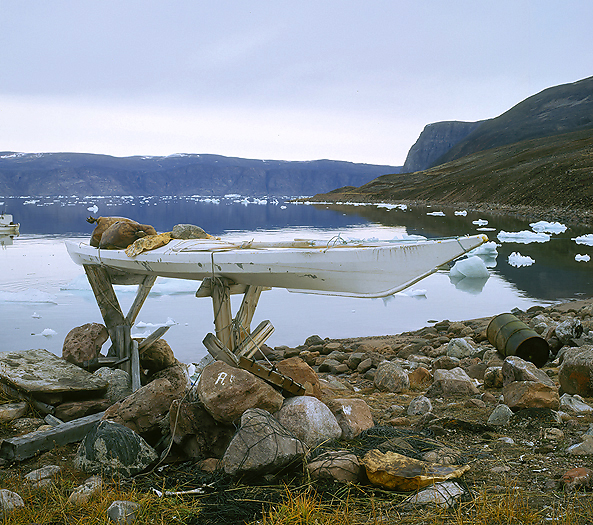 When not in use it is normal to place the kayaks on a kind of holder. Here from Kangerdlugssuaq by the Inglefield Bredning. 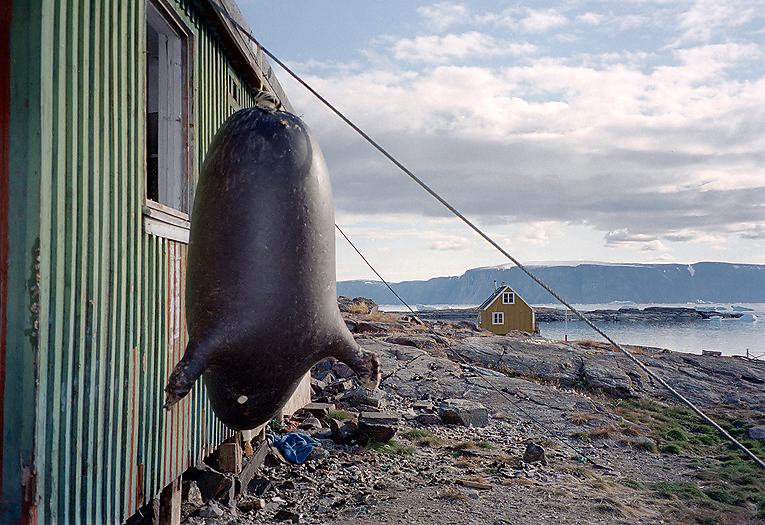 Seal in preparing for being a Bladder in conjunction with hunting Narwhals. The hair has been removed from the skin and all openings in the skin are plugged. From Qeqertat (Harward Islands) innermost in the Inglefield Bredning. 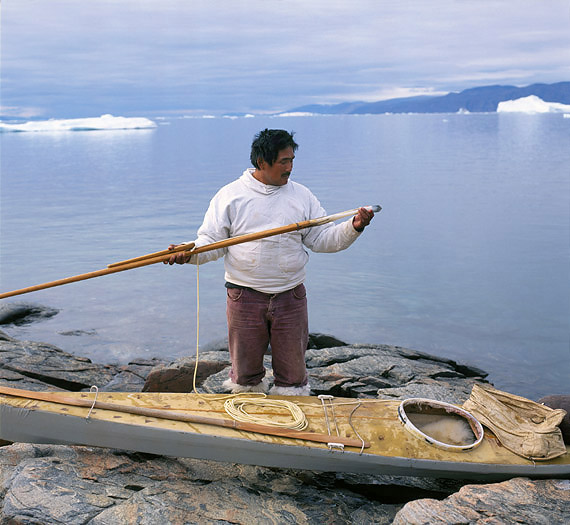 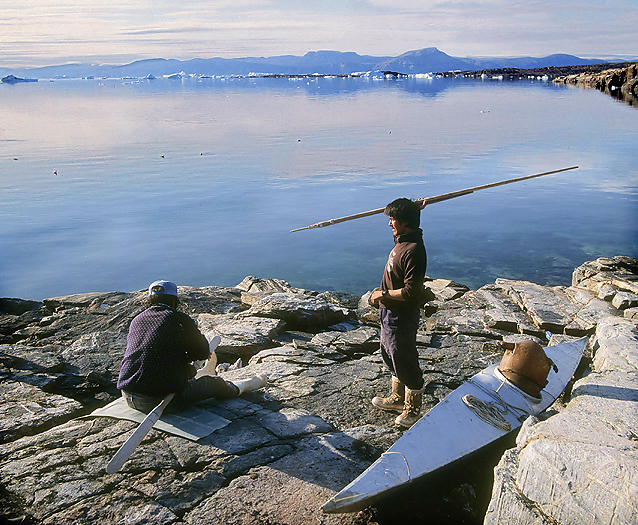 Mamarut prepare the kayak oar, while Gedion get familiar with the balance of the lance. 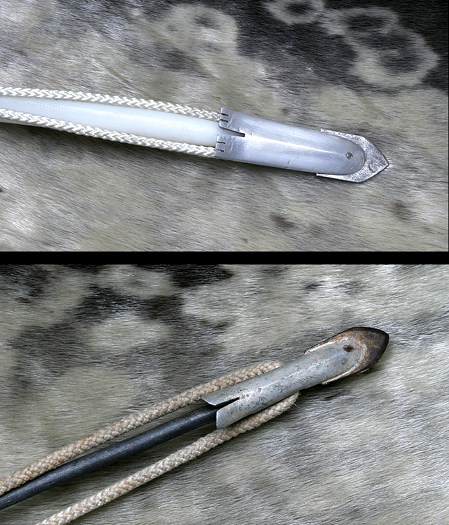 Harpoon Head for Narwhal hunt above, and Walrus hunt below.

THE BATTLE.  Mamarut Kristiansen has now got his animal. The whale is only 20m away from him in his kayak as it bends forward and dive, -with the harpoon point in its back. The 2m long shaft loosen as it shall do, and the rope mounted to the harpoon point itself glide out from the kayak. At the end of the now tightened, 30m  long rope, an inflated Seal Bladder is from before connected. This bladder is drawn by the whale a couple of meters down in the deep of the water. But diving while dragging the inflated bladder down in the sea is to hard for the injured whale, and the bladder is soon exposed on the surface of the water again. Also the whale come bleeding up from the deep again and is throwing itself heavily around at the surface before going into the deep again. In the next half an hour the whale is fighting for its life and is on the surface several times. In one occasion when the Narwhal came up again, it came with an incredible speed, vertical up with its 2m long spiral-twisted tooth first, only 1/2m away from spiting Mamarut sitting in his kayak. It is not uncommon that these bold people loose their lives in the struggle for food. Two persons are so far disappeared on the sea this year. The Narwhal are now worn out, and Mamarut can end the more than 1000kg heavy animals life with his lance. 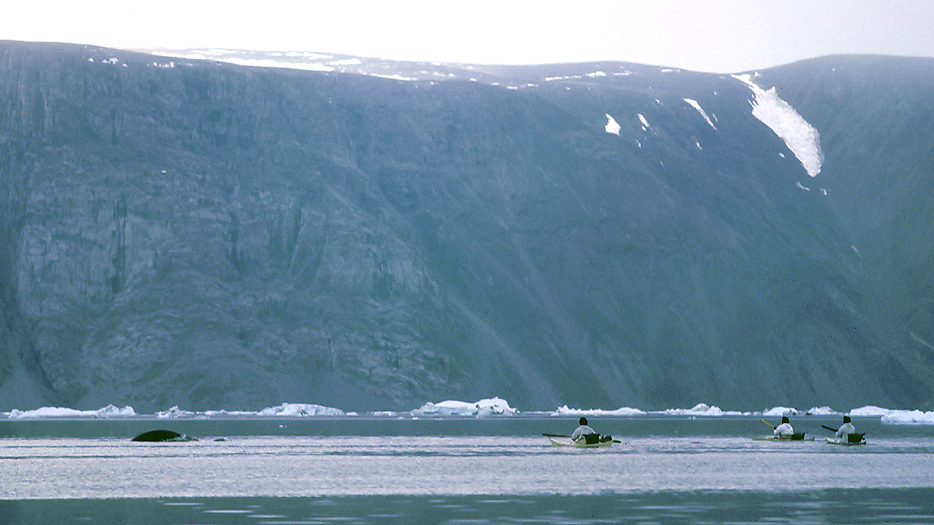 The Polar Eskimos wait until most Narwhals in the flock have passed by before they start the hunt from their kayaks. 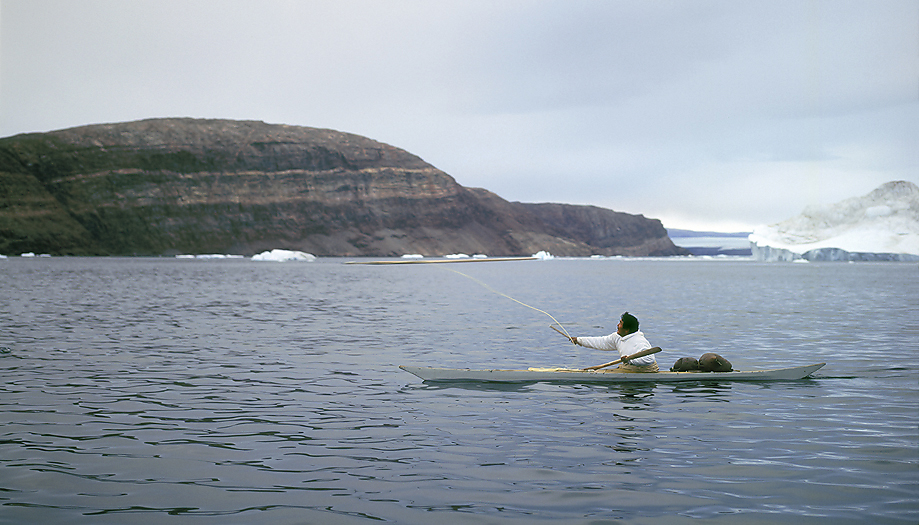 Mamarut throw his harpoon against a Narwhal. At the very left side of the photo you can see a movement in the water that come from the Narwhal  just outside the image. Note that he use a Spearcaster, -this a handle-device used to impart greater impetus to the thrown spear. The Spearcaster is normal to use on a dedicated Harpoon for Narwhal hunting, but i.e. not for Walrus hunting. The reason for this is that the distance between the hunter and prey is relative long which need greater speed & accuracy of the thrown Harpoon. The result of this specific cast was successful. 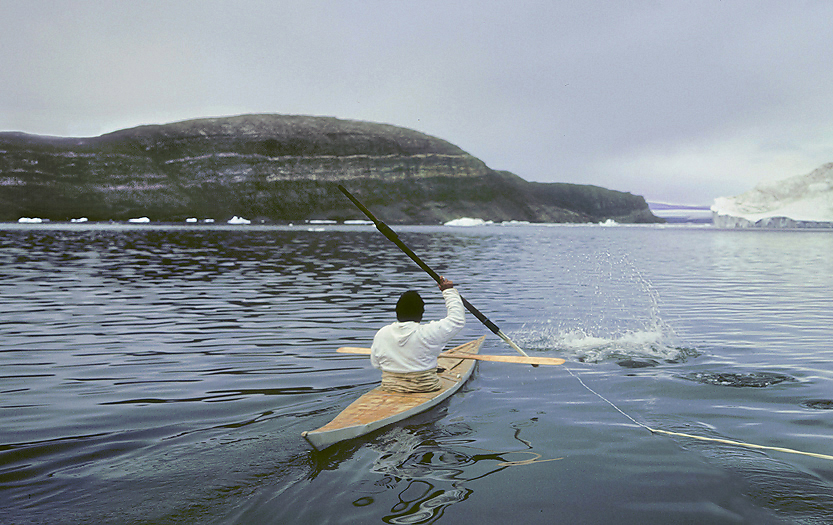 The Narwhal is hurt and weakened, -and Mamarut is about to end its life with the lance.

The whale is slowly towed to the nearest land for up-cutting. The whole family waits there and shouts excitingly. I hear the word “Mattaq” is pronounced many times in this unfamiliar language. “Mattaq” is the inuit name for whale-skin, and is undoubtfully the Eskimos snack no. 1.  Due to the successful hunt, there will for sure be celebration tonight with talking, joking, drinking unsugared tea and not to forget playing different games. This raw whale-skin, which is full of Vitamin-C, have a sweet nut-like taste, and taste in fact much better than it looks like. Our hyper modern freeze-dried food we have brought with us up here are put aside for some weeks in favor of this 1st class whale beef. 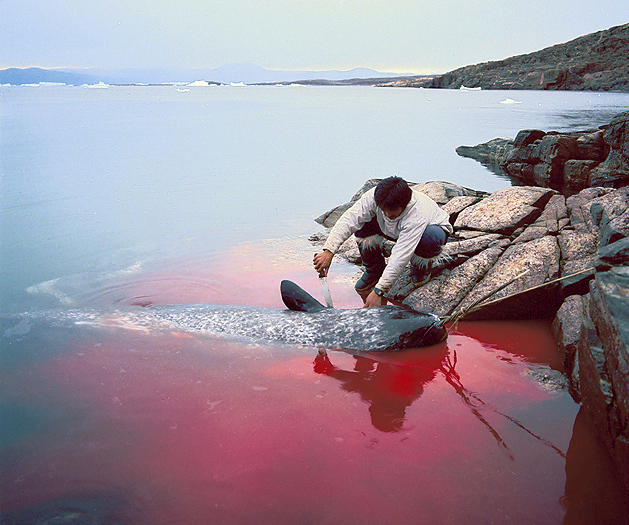 Gedion has towed the killed Narwhal to the shore for cutting it into pieces. 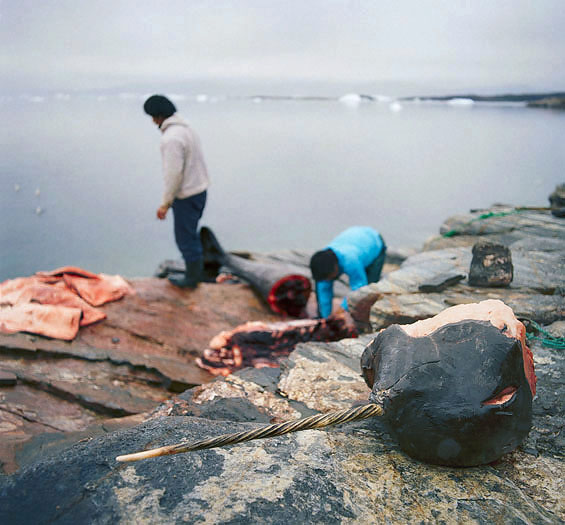 From the Narwhal cutting. 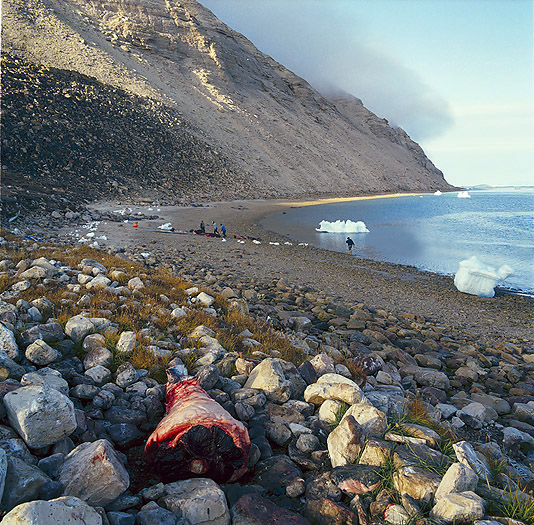 The Narwhal is stoned down to make a meat cache,- as the people of the high north have done for thousands of years.

Details from a Polar Eskimo Kayak with rope and Spear Head ready for the Narwhal hunt. 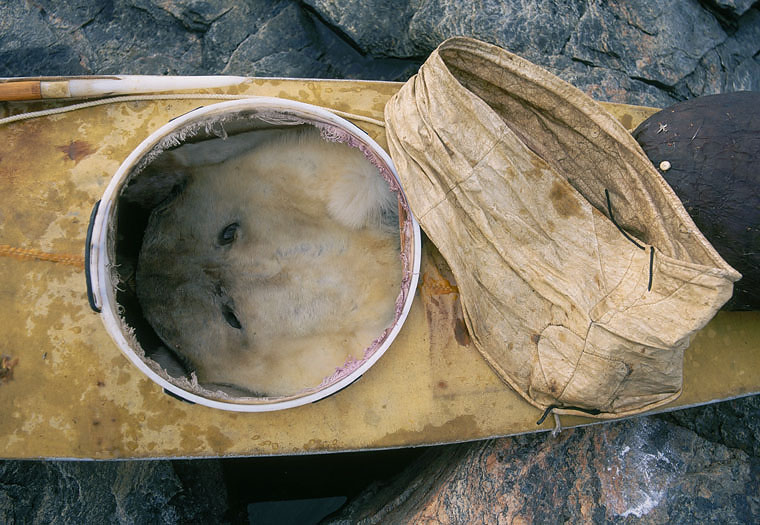 The Polar Eskimos in Thule believe that sitting on fur of a Polar Bear head in their Kayaks will give them the best luck when hunting. Polar Eskimo with traditional Polar Bear trousers and Tukumeq Peary (grand daughter of Robert Peary) are relaxing outside the hunters house in Qeqertat. Robert Peary claim to be the first human on the North Pole. Together with Matthew Henson and 4 eskimos he reached th pole April 6, 1909. The Polar Eskimo hunter (photo above) made this clothes hook of ivory and put it up outside his house.

From another Narwhal hunt in the Inglefield Bredning: 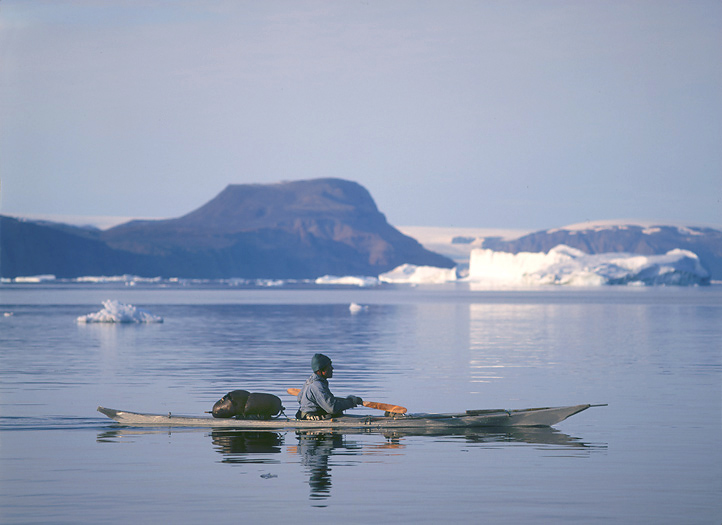 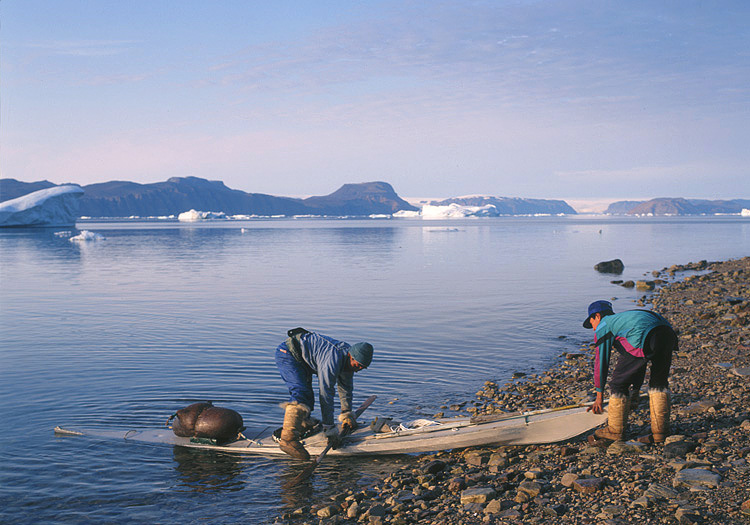 Note Mattsutsiak`s technique for stepping out of his kayak. 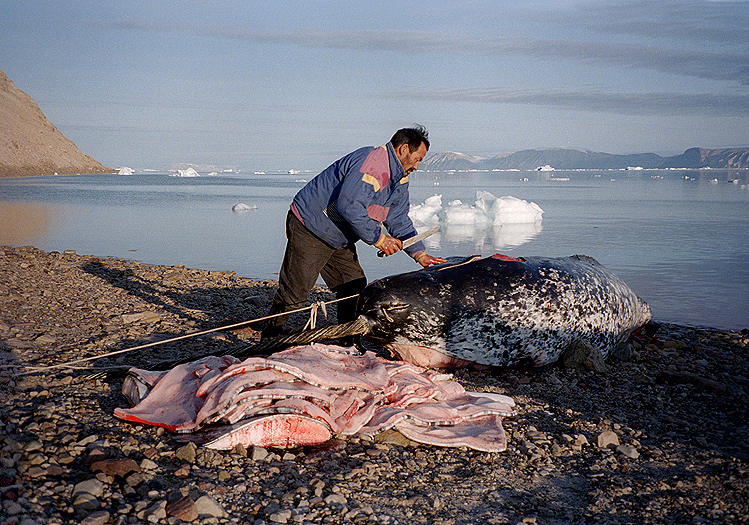 Avataq Henson is skinning a big Narwhal male he just caught near Nutat in Inglefield Bredning. Avataq is the grandson of Robert Pear`s servant Matthew Henson that accompanied Peary on seven voyages to the Arctic over a period of nearly 23 years. They spent a total of 18 years on expeditions together. He is best known for his participation in the 1908-1909 expedition that claimed to have reached the geographic North Pole on April 6, 1909. Henson said he was the first of their party to reach the pole. they called him Mahri-Pahluk. He was remembered as the only non-Inuit who became skilled in driving the dog sleds and in training dog teams in the Inuit way. He was a skilled craftsman, often coming up with solutions for what the team needed in the harsh Arctic conditions; they learned to build igloos out of snow, for mobile housing as they traveled. His and Peary’s teams covered thousands of miles in dog sleds and reached the “Farthest North” point of any Arctic expedition until 1909. The Hurlbut Gletscher (glacier) on the south side of Inglefield Bredning. This glacier was named by Robert Peary after Geoge Hurlbut (1830 – 1908), secretary and librarian of the American Geographical Society

From Stone age to Atomic age.

Up to as late as the 1950`s several Polar Eskimo families in the outskirt of Avanersuaq county (Thule) lived in dwellings made of stone that were partially dug down into the grown. A 3m long tunnel led to the only room, circular & 5-6m in diameter, were they lived, ate and slept. A raised sleeping & living platform of stone was the highest level inside to keep the deepest winter cold away. Here at 77 Degree north, only a stone`s throw away from the Inland ice, the winter is long and cold. Dozens of these simple dwellings are still to be seen in the area. The interesting thing is that we find equal dwellings on the North East coast of Greenland, across the Inland Ice cap from here. The only exception is that the dwellings on the North East coast now are the archaeologists playground because it is stated that many of these are more than 1000 years old. 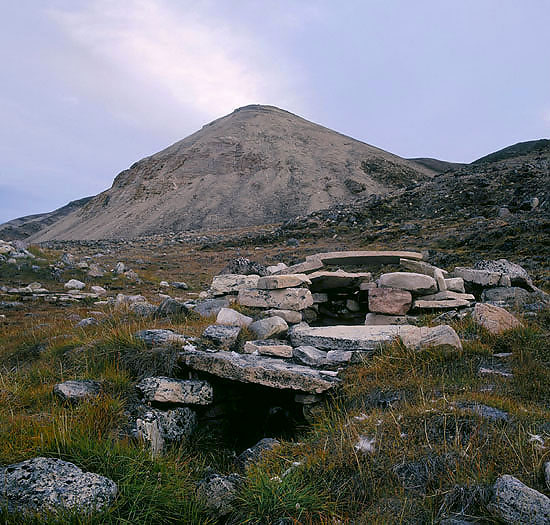 Dwellings as these near Thule was in use by the Polar Eskimos until the 1950`s. The story says that the last Eskimo of the Sadlermiut Culture was killed beside this stone at Iniartorfik on the rough stretch in Baffin Bay between Dundas and Qaanaaq.

As other indigenous people, the Polar Eskimos have also had their conflicts with the modern man. Their unique culture was seriously threatened when they in 1953 were forced to leave their traditional living grounds at Dundas, and was moved to their new Thule, called Qaanaaq about 100km northwards. It was during the “Cold war” that the US constructed the Thule Base as a part of the “Ballistic Missile Early Warning Radar Site”. 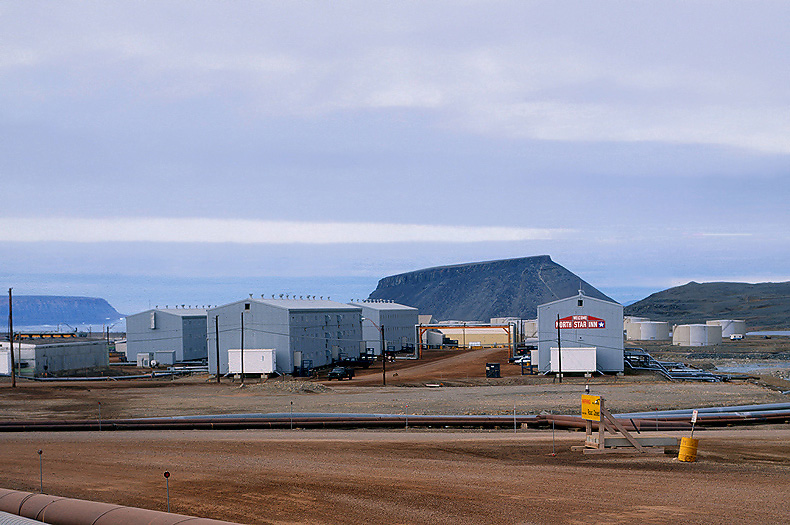 “Thule Air Base” with the Polar Eskimos holy “Dundas” mountain behind.

Next time the Polar Eskimos got to know the white mans real world was in 1968 when a US B-52 bomber crashed on the sea ice west of  Thule Base and 4 hydrogen bombs were flinged out of the plane. The area is official cleaned after this crash, but there are room for discussions about this since it is stated that the number of  cancer cases on both eskimos and military personnel increased rapidly in the 1970`s. This was followed by many rounds in court. At the end of the 1990`s the occurrences of cancer are slowly decreasing even though the sea bed sediments still show a relative high degree of radioactivity. In the late 1990`s discussions started whether US personnel are to be withdrawn from this area on Greenland so the Polar Eskimos can resettle their best hunting grounds near the foot of their holy Dundas mountain.

May be it is as important to take care of and protect the indigenous people against extermination of their original existence and unique way of living as it is to protect and conserve birds & mammals. None of them can be called back to their origin again.

While sitting in the plane on my way back home it is a bit strange to think that the Narwhal tooth I have in my baggage (fully legal) once was worth 10 times its own weight in gold…………..

By continuing to use the site, you agree to the use of cookies. more information